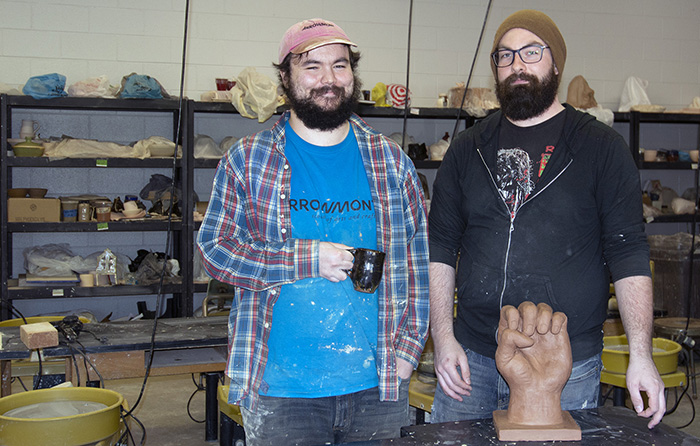 Rockingham Community College Fine Art students Len Jordan, at left, and Joe Hodge, will each head to Arrowmont School of Arts and Crafts in Gatlinburg, Tennessee this summer for six-week work-study programs. This will be Jordan’s second summer there.

“They will work for three weeks, and then have three weeks of classes,” said RCC Fine Arts instructor Philip Haralam. More than 90 people applied for the program.

Jordan’s goal is to focus solely on clay, while Hodge will take classes primarily in clay, but also in sculpture.

For the three non-class weeks of their time in Gatlinburg, Jordan will work in the kitchen.

“You gotta feed the people,” he said.

Kitchen duties include assisting with food preparation for all campus meals and events, washing dishes, cleaning the dining hall, and setting the hot food line.

Hodge announced, a bit less enthusiastically, that he will be doing maintenance work. That includes repairing equipment like vehicles, electrical and plumbing systems, cleaning the grounds and general building upkeep.

“Maybe that will be more fun, if you’re outside,” Haralam said.

Jordan can vouch for the reputation of the handymen because he was selected for this work-study program last summer as well.

To be considered by Arrowmont for the program, Jordan and Hodge had to apply and submit their resumes, references, and portfolios.

“You have to be pursuing a career in the arts and have a certain technical skill level,” Jordan said.

The work-study students at Arrowmont enjoy meals, lodging, and professionally equipped studios on a 14-acre campus. The school looks for students who are mature, team oriented, self-motivated, and interested in the arts.

Jordan paused as he reflected on his time at Arrowmont last summer.

“It was life changing, honestly. It’s an exciting new experience to go and meet people and ask them what their name is and what their medium is. It’s not every day that you can just walk up to people…,” he said.

“It was just a good time. It was a lot of like-minded individuals who wanted to work hard and play hard. Lots of educational, smart connections,” Jordan said. “I know people from California and New Jersey now that I had no chance of knowing otherwise. They gave advice willingly and wanted everyone else to be better, because we were all there to improve.”

Hodge is excited about his first time at Arrowmont.

“I look forward to meeting new people, getting ideas, and bouncing ideas off of other people,” he said. “Also, to travel. I love Gatlinburg. Just being in a different environment opens the potential for all kinds of things.”

Gerri Hunt is director of public information at Rockingham Community College. She can be reached at huntg0780@rockinghamcc.edu or 336-342-4261 ext. 2170.