RCC’s Practical Nursing program graduated 20 students in the Class of 2021.

Chase Coggins has been named one of “The Great Within the 58” – a North Carolina Community College System Academic Excellence Award that recognizes one outstanding student at each community college across the state.

His nomination letter, written by an RCC faculty member and presented to an RCC committee to choose its most excellent student, stated, “Rarely does a student rise to the level of academic excellence that Chase Coggins has during his tenure at RCC.” … He scored the highest grade in both Biology 111 and 112, “and his quick grasp of tough concepts in Biology 168 and 169 (Anatomy and Physiology I and II) allows him to be a valuable peer resource to other students; he is constantly mentoring other students before or after lecture and during labs.”

The letter further stated that Coggins consistently wrote among the best essays in his English 242 (British Literature II) class, and began working at the Writing Center the following semester. “He is patient, kind, and encouraging to all students, no matter how many issues their assignments might have. Chase’s personality and quick wit make him approachable and a favorite in the Academic Resource Center (The ARC) as an English peer tutor for the past two years. The same qualities that Chase exhibited as a student in his English classes – insightful, precise, academic writing on a variety of subjects – are what make him a uniquely effective peer tutor.” 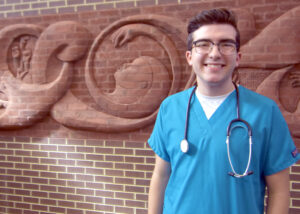 Coggins is in his fifth year at RCC. It’s not that he’s taking his time finishing his courses; he started taking college-level classes when he was just 14, when he moved from the unincorporated mountain village of Cashiers (population 157) to enroll in Rockingham Early College High School.

He was admitted into RECHS and a similar program in western North Carolina, but chose to move to here and live with his dad and stepmom to attend RECHS.

“(RCC) has networking with UNC-G and so many four-year (colleges) around here, this was the better option for me. Part of the Early College program is that they put you in as many different classes as possible, so you take philosophies, psychologies, sociologies – all different fields. It really helps you in high school, when you’re trying to figure out what you want to do,” Coggins said.

During his senior year at RECHS, he took Biology 111 and 112 at RCC. “They were some of the first sciences I had taken that really guided me; I knew I needed to be somewhere in science,” he said. “Moving here specifically to attend the Early College program within RCC was one of the best choices I have ever made.”

Coggins graduated from RECHS in May 2019 with 69 college credits completed, and received his Associate in Science Degree from RCC that July.

But he was not finished.

Coggins continues to take classes, earning an additional 14 credits as of February 2020, and plans to enroll in RCC’s Nursing program in Fall 2020.

Coggins has maintained a 4.0 grade-point average at RCC – including the time he was also in high school, the past three semesters holding down two jobs while enrolled full-time, and now as he takes just one course but still works 46.5 hours per week.

Coggins is employed at Moses Cone Hospital in Greensboro in the neuro-trauma intensive care unit, where he helps with patients who have had strokes, been hit be vehicles, have suffered gunshots or stabbings, and more.

“I really, really love it. The best description I have is that it’s controlled chaos. It’s always something new,” said Coggins, who also continues to tutor English students at RCC.

“That’s another thing RCC has done for me; that’s my first job,” he said.

Coggins reflected on his time being dually enrolled in high school and college.

“It was a lot, but it was manageable,” he said. “When you’re in the program, the Early College does an excellent job of prepping you. You don’t realize how much faster you’re moving.”

Counselors told him that if he wanted to finish up in four years instead of five, he would have to take some summer classes at RCC. He did that after his sophomore and junior years at RECHS.

“You take summer classes and dual credit classes. It’s not like you’re taking all of the classes you would take in high school, and then all of the 69 (college) credit hours; some of the college classes count for high school, so you can “cheat” a little that way,” he said with a chuckle.

“It’s really just learning to prioritize your time,” he said. “That’s one thing Early College will teach you, that procrastination will get you nowhere.”

Coggins said his main struggle has been balancing work and school.

“I’ve learned how to go into a mode where when I study, I’m going to study. Instead of studying for three hours with music playing and the TV on, I get rid of all of the distractions and I just study,” he said. “I know I don’t have three hours for that. I’ve learned how to optimize my time and really focus. That’s one of the biggest things I wish I had known going into Early College.”

That tip is applicable to many things in life. Put all effort into a task and focus, and it will make the task fly by much faster than trying to multitask, he said.

Coggins’ efforts also took him through RCC’s Certified Nursing Assistant program, which he described as excellent.

“Everything I’ve ever taken here, I’ve thought was really good. It’s the fact that instructors can really focus on you. They don’t have 200 students, they have 20. It’s great,” he said. “And you save a ton of money.”

When he obtains his RCC Associate Degree in Nursing, Coggins plans to take an online Registered Nurse to Bachelor of Science in Nursing (RN to BSN) program, through UNC-G or Winston Salem State.

“It will depend on what their prerequisites are, and whichever one will be quickest to get into. From what I’ve heard, in the RN to BSN program, you’re just writing a ton of papers. I’m an English tutor, so that’s fine. I just want to do it online and knock it out,” he said.

Coggins is unsure about what will come after that. He could pursue becoming a Nurse Practitioner or a Certified Nurse Registered Anesthetist. Either way, it’s a field from which Coggins has never been far. His stepmother, sister, brother’s fiancée, and aunt are all nurses.

“The further I get into nursing, the more I enjoy it. I think it’s a field unlike any other. You just have to be a special kind of person for it,” he said. “Just that active caring for people, making them feel better, it brings me joy. Even the bad parts that aren’t so fun, the good parts make it all worthwhile. That’s all nursing is, doing the little things for people to make them feel better again. That’s what drew me to the field.”