RCC’s Practical Nursing program graduated 20 students in the Class of 2021. 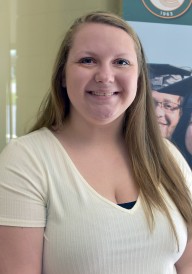 Marisa Sherrett arrived at Rockingham Community College within days of moving to the area, with one unusual item packed away in her luggage: A Bachelor of Science degree from Kentucky Christian University, from where she graduated in May 2018.

“I started to think I wanted to be a pharmacist, so I did all the pre-pharmacy work. But I learned I’m too much of a people person to hide behind the desk all day,” she said.

She wanted something more hands-on and more involved than being a certified nursing assistant.

“So, I started thinking PA – a physician’s assistant – would be a better option for me,” she said, and began researching places where she could obtain contact hours.

“I went blindly in, like I was falling off a ledge … you either catch yourself or not,” she said.

But rather than fall, Sherrett has soared.

“I managed to land on my feet and I’m doing pretty well at it, from my perspective.”

And she’s been recognized for her hard work, recently winning a $500 scholarship from the Accreditation Review Council on Education in Surgical Technology and Surgical Assisting (ARC/STSA).

“The scholarship can go toward anything, but I’ll put it toward tuition,” Sherrett said.

She finishes the program this month, capped off by the college’s surgical technology pinning ceremony on July 18.

Sherrett admitted that obtaining her four-year degree before coming to a community college was a long route.

“I did things backwards,” the former cheerleader said with a laugh. “But it kind of helped; it made [the surgical tech program] easier, with all my extra classes. With my chemistry classes, I know more in-depth. With having microbiology, I understand the diseases and why they happen … and now I know the solution. So it all kind of panned out together.”

Sherrett said there’s a big difference between four-year institutions and community colleges. Living on campus meant classes were just a five-minute walk away. The class sizes were much larger, starting out with 30 to 40 students.

“You were responsible for so much more, too. You’re expected to fully be an adult, I guess. You become more independent,” she said. “The expectations are very different. Here, they don’t really hold your hand, but they really want to see you succeed and push you to that point; at a four-year, you either do it or you don’t.”

“It was more controlled than I was expecting. I was expecting craziness, like with instruments. But it wasn’t quick, it was more of a steady pace. And things are meticulously recorded in there. I knew there was a routine, but it is so detailed,” she said.

And the teamwork was different than she thought.

“I was expecting the doctor barking orders, (but instead) the doctor says ‘this is what I need to do, what can I use? What do you have back there?’ So you’re not on the sidelines, you’re into it. You feel like you’re actually doing something other than just organization,” she said.

Once Sherrett finishes with RCC this month, she plans to work for a couple of years to establish a reputation and network. Then she will continue her education after applying to physician assistant schools.

Gerri Hunt is director of public information at Rockingham Community College. She can be reached at huntg0780@rockinghamcc.edu or 336-342-4261 ext. 2170.